If I Had a Magic Wand

[responsivevoice] About ten years ago, I compiled an arsenal of props that I kept in a bag in my office at work:  a black pointed hat from a witch’s costume, an amazing array of hand puppets, a mirror, and a magic wand that was very precious to me. Everyone was intrigued by this wand, which was filled with tiny, colorful pieces of something or other that rose and fell as I turn the wand over.

Two years ago, my wand went missing and I felt terribly sad and frustrated. I looked for it everywhere. I had only used it from my chair at work, so the odds of it disappearing rather than being lifted by sticky fingers were pretty low.

A few weeks ago, I reached into my bag of tricks and out came the magic wand. If that isn’t magic, I don’t know what is.

In honor of finding the wand, I’ve decided to center my work this week with all my groups at the rehab around the following idea: If I had a magic wand (which I do) and magic powers (the jury is still out), what would my students ask me to give them or do for them? 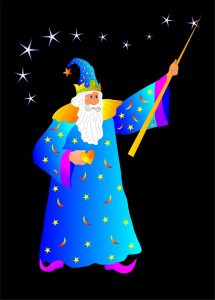 It’s an excellent opportunity for them to formulate what they really want, what they wish they wanted, what they wish would be manifested in their lives now or in the future. I will give them examples to help set them on a good course in this exercise.

But I do not expect this from my groups. They are in the early stages of learning new behavioral patterns, thoughts and feelings.

I’m going to instruct them to ask for things like freedom from guilt and torment, a reprieve from negativity and a hopeless outlook. I’ll point them in the direction of strength and opportunity to get back on their feet.

Actually, there are those who’ve never been on their feet, so I would try to steer them in the direction of realistic goals for life.

If only the world leaders would come to me because they heard I have been endowed with some powers. Oh boy, would I do my best to set them straight. I think I’m going to sign off now and begin praying my magic wand can do the trick. [/responsivevoice]