[responsivevoice]The other day, in the group I was leading, I asked if any of the participants had an obsession or attachment they wanted to explore. The gentleman to my left, a weed-smoker for thirty years, said, “I don’t know, Dr. Ellie, if this is an attachment. I sure know that it has made my life quite unbearable. My family says I’m impossible to live with. Tell me what you think.”

He went on to describe the degree to which things being out of order, different from how they should be, drove him nuts.

I asked for examples. He said that if a closet door was left open, he couldn’t stand it. If a picture or wall hanging wasn’t perfectly aligned, he was uncomfortable, physically squirming. Things like crumbs that hadn’t been swept up, a spoon on the kitchen counter – these were intolerable. The juice of a tomato on his plate seeping into the cottage cheese beside it was so upsetting, he was willing to throw the whole meal out and start again.

He said he’d felt like this all his life, as far back as he could remember: “Dr. Ellie, am I insane?”

I took a breath and told him: “You’re not insane, but these thoughts are.”

The whole group burst out laughing. It is an amusing distinction, but I meant it completely.

This gentleman had developed an obsession with things being RIGHT. The key word here is obsession. That’s what underlies these potentially hazardous attachments. He did not have a simple preference for orderliness; he absolutely could not abide anything else. The intensity of his feelings was what gave him so much trouble in life. 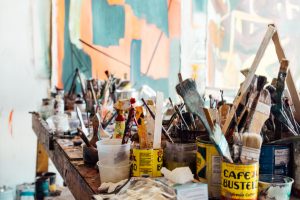 An impossible mess – grounds for insanity.

But what did it mean to him or do for him, anyway, this amorphous sense of the “right” versus “wrong” order of things? It’s interesting to note that when he spoke again later, he mentioned that he had an enormously overdeveloped (hint, hint) need to see justice served, crimes punished and good deeds rewarded. I pointed out to him that there was a profound connection between this sensibility and his need for the material world to be ordered correctly.

Obsessive attachments occur when we connect ourselves to another human being, a belief system, or an object or material in the physical world. We often develop a “can’t live with it, can’t live without it” relationship, fixating on being in close proximity to it.

Across the board, we all share the same notion that our attachment will do something for us. In the case of this gentleman, his triumph over chaos and imperfection made him feel powerful as well as calm. On the one hand, it was terribly disturbing and annoying when things weren’t right; on the other hand, it was enormously gratifying when he was able to do something about it. That moment when he could interact with what was upsetting him – and fix it – boosted his confidence and left him with a feeling of achievement.

Of course, he would have been better off not needing to get into this whole dynamic in the first place. He would be best advised to find other ways in which to feel successful. Anything smacking of OCD-type thinking is generally fear-based, so naturally I would wish that he no longer suffered on that level.

But so it goes. We develop a need and keep coming back, even when it’s clear that the idea behind our clinging is all wrong. Unfortunately, logic fails to dictate this situation and many of us, if we are perfectly honest, have or have had some ridiculous attachments that ultimately come down to magical thinking.

I have seen obsessions so passionate and cruel, it’s heartbreaking to watch.

I have found it useful in these circumstances to offer the following advice: Visualize yourself feeling calm and comfortable, free from the grip of your obsession. If the problem is a phobia, imagine yourself perfectly serene in the face of that which scares you. If it’s more like OCD, imagine that you can liberate yourself from the compulsion just by seeing yourself without it. Imagination is a celestial tool, one that we often use to our detriment but which could literally save your life.

Should you find yourself falling into the trap of have-tos, pay attention and extricate yourself from this snare. It is never any good to be trapped, even if it’s just in your mind.[/responsivevoice]