The love of a dog

[responsivevoice]Often, when I do guided thinking with my clients, I ask first if they love, hate or fear dogs. (Guided thinking is a therapeutic technique that involves me instructing my client to render forth an image or idea that I suggest.) For some people, it can be hard to conjure up the necessary mental pictures, but an animal lover never seems to have a hard time bringing forth a soft and mushy pup to love. The way their faces light up tells me even more than their words.

This image is so easily introduced, it gives my clients the confidence to proceed with the work.

That wagging tail and peppy, unrestrained show of affection! I believe that dogs touch so many of us because they are the living embodiment of enthusiasm and the open heart. I cherish the power of these mental states. Just the presence of a happy dog, even one encountered walking down the street, has the power to transform, to elevate the spirit. By its very nature, a pooch radiates good mood. 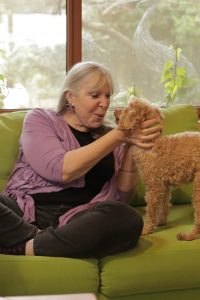 Who’s the cutest dog in the world?

The thing about a dog is: It is emotionally honest. Its joy is unrestrained, unbridled, and it does not feign its emotions. You can trust a dog to be real. That’s why, when a dog seems grateful for our very presence – as dogs tend to be! – it gives so many of us a sense of total acceptance. It opens our hearts to love and tenderness.

Ten years ago, my husband came back from the farmers’ market with a white poodle. It was the first male dog we ever had. His predecessors were lovely ladies, mostly breeds of unclear distinction, major shedders but – of course — friendly enough.

Anyhow, I took a shine to the pup, whom I named Doggy-Dog. In the year that we had him, he swept me off my feet. In fact, he was the first canine guest I ever invited into the therapy room to spend time with my clients. He came with me, behaved like a dream, and lent himself for pats and hugs, softening the hearts of some of the most reluctant, uptight visitors. He was even a major character in a documentary that was made about me.

One unfortunate night, while we were at an event at the rehab where I work, my husband got a phone call that something had happened to Doggy-Dog. The gate to our home had somehow been left ajar; Doggy, who never really left the premises on his own, ventured out into the night and was literally chewed to pieces by a neighbor’s dog.

I was beside myself. I was incapable of even saying goodbye to him. It wasn’t possible. I was devastated and let my husband, son and son-in-law bury him.

A week later, a litter of pups was born an hour away in a nearby city. Somehow, we got wind of the birth and I got this wacky idea that our new dog was somehow magically connected to Doggy. A soul transfer, if you wish. We picked her up and made her ours. I remember driving her home and explaining her lineage to her. Now, I understand as a psychologist that this could be construed as pure madness. But the only one who would think that is obviously a person who knows nothing of the love of a dog.

There is something inexplicably magical about the relationship people establish with their pooches; you are obligated, if you truly love your four-legged pal, to speak to it in nonsensical tones, often articulating silliness, serious foolishness that comes straight from the heart.

This pup, Chica, can be alone in the house for five minutes or five hours and still give me the heartiest welcome, bouncing up and down. The sincerity and generosity of her feelings are something that no human being, no matter how kind or loving, could possibly produce. With dogs, there’s a jumping for joy that comes with the territory. Personally, I’ve never had any other animal express such sincere appreciation of me.

It’s impossible to be indifferent to this spectacle of homecoming. And I repeat, I could be gone for hardly any time at all and still get the heartiest of welcomes.

If that ain’t healing, I don’t know what is.[/responsivevoice]