Working with my hands

[responsivevoice]I’m not sure I’ve ever articulated this before on the blog, but I’m someone who does very little with her hands. While I’m married to an artist who is interminably, inevitably in a state of manual doing, I hardly peel a cucumber for myself. He’s constantly putting things together: he constructs sculptures of metal, he made all the plates in the house and hundreds of tiles to be used decoratively, he built all the furniture.

I, on the other hand, have categorized myself as a Thinker or Life Teacher.

Below the neck, where the arms and hands are, there’s never much going on.

At least, nothing with a real purpose. I once had a short-lived but very real addiction to snapping bubble wrap with my fingers. It came to a full stop, however, when I got busted by my friend Al Secunda popping those bubbles while driving and talking to him on my hands-free. He heard the snapping sound in the background and called me out. It’s an ironic expression, in this case, hands-free; between the steering wheel and the bubble wrap, my hands weren’t free at all. By the end of the week, I had given it up as one more irresistible urge or preoccupation that the universe had set before me as an opportunity to prove, yet again, that I could use my Twelve Step recovery to get over the hurdle. After all, who wants to be addicted to something so pathetic as snap, crackle, and pop? 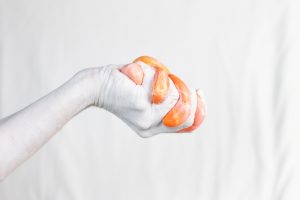 Now, I have just become the proud owner of a case of something called slime. It was a gift from my little friend Gili, who had a serious stash of this stuff in a drawer under her bed, and it has me intrigued. The material is unlike anything I know. It’s a bit sticky and very malleable. It stretches and moves around almost as if it had a secret brain. I placed the rolled-up balls in the tin case, and some time later I found that the material had completely expanded, taking on the shape of the case, when I know darn well that’s not how it looked when I placed it there. I love that mysterious element.

I was fooling around with it yesterday when two of my grandchildren, ages 5 and 7, asked if I could share it with them. They seemed more familiar with the product than I. Guess it’s an age thing. At seventy, playing with nonsense might be misconstrued as some mental deterioration on its way to senility.

I’d probably be better off with play-dough. That’s as close I’m going to get to the raw material that my husband uses to make all the ceramics in the house.

Today, however, I did do something productive with my hands.

For the first time in my life, I approached a cantaloupe with the intention of being the one to make it available for consumption in my home. I would, I decided, be the one who would cut it into all those little chunks. I’m glad no one was watching me do it; I was clumsy, and there were moments when I was indecisive and turned completely around. Separating the pulp from the rind did not come effortlessly. On the one hand, I needed a strategy; on the other hand, I needed the dexterity. I must have been like a first grader getting an A, when I showed my husband my one hundred sweet, neat and absolutely fabulous cantaloupe chunks in a ceramic bowl (that he had made). How accomplished I felt!

As I sit now and tell this proudly to Shani, she asks me, “Don’t you have a melon baller?” Obviously, I don’t know the tools in my own well-stocked kitchen. It would never have occurred to me to look for such a thing. I cut them all by hand, and without cutting myself, too.

All of you out there who make your own meals or do your own gardening must find this absurd and incomprehensible. Still, even at seventy, it’s not too late to figure out how to dismember a cantaloupe.[/responsivevoice]